I was born and raised in Jakarta. As Jakarta citizen, I consider myself as a privileged who don’t need to worry about life other than trying to avoid eating dirts and open a drug cartel down the alley during my teenage years. Having said that, it is human nature to get soft and comfortable when everything seems to go their way.

Whenever a stranger or an acquintance asks me what I want to be someday, I answer that I want to be a successful businessman — for that is what I have dreamed about. Being able to run my own company while also help more people will be an incalculable blessing for me.

My father used to give me a reality check once in a while. “Your are one ambitious man. But judging from your work ethic? You will get disappointed.” he remonstrated with me. He was right, of course, seeing how I usually performed at school. 6 semesters of high school, I never ranked higher than 20th. Yeah, I was THAT disappointing and to even describe it as ‘disappointing’ is an understatement.

Things kept going that way until one day, I said to myself ‘enough’.

Less than 2 years ago, I envisioned 2015 and 2016 to be the breakthrough year for me in terms of personal development. Honestly, I did not have a specific master plan or a target to actually reach my goal. And to finally say that it went better than what I expected in the beginning, I am grateful to say the least.

2015 was a year full of setbacks and obstacles since I consider last year as the year where I really started everything from the beginning. I got the opportunity to run my own restaurant while also achieving my highest GPA (yet) in the 3rd semester. It was very challenging, but I managed to prevail against the obstacles. All things aside, I seriously considered 2015 to be the best year of my life.

I started 2016 roughly due to my unwritten obligation to be the decision maker for almost every step that we made. Despite that the final results were not what I expected it to be, the firsthand experience of running a business was invaluable on its own. All I can say is that if you ever face the opportunity to do so, you might as well reasses your priority so that things can fit your objective accordingly.

Within the first half of 2016, I also managed to participate in several academic competitions in both national level and international level. Uhmm, yeah.. ‘several’. I was so inspired by my surroundings that I became so easily distracted by every noise and flinch at each movement. As it happened, my attendance rate at the college’s event also gotten worse. I looked lost sometimes and seemed unable to generate creative ideas as I left very few in the tank. Simply put, everything went worse than expected and that wasn’t exactly what I had in mind when I said I wanted to make 2016 ‘better’.

At that point, I proved the famous verse that once said “embrace too much, ended empty-handed” to be true.

I was too excited that I tried to participate in every opportunity that I encountered. Regardless of ‘why’, I just couldn’t say “no” when asked and I only have myself to blame. I was unable to capture any victory from these ‘several’ competitions that I decided to take part in. All things considered, there are more than enough lesson to be reflected on and I marched on to fix it.

At the holiday, I took a lot of break while also trying to reflect on the progress for the previous 12 months and regain the focus that have gotten weaker at that point. I decided to remind myself about my goal and evaluate my progress to see where I failed. My primary objective was to not repeat any mistake I have comitted for the previous 6 months. All I wanted was to have a laser focus on one competition and tried to ruthlessly say “no” to every competing goal, opportunity, and priority.

In September, words arrived to me that my team was choosen to be the top 15 finalists in CHRONICS 2016, one of the biggest product design competitions in South East Asia. From that point onwards, I forced myself to say “no” and I can proudly say that was the best decision I’ve made in this year alone. Saying “no” that time allowed me to have better focus. I went on to prepared for CHRONICS 2016 while also holding the position as the project officer of an internal event. It was tough and challenging. Very tough, in fact. CHRONICS took a lot more effort, focus, and energy than I first expected and the process took its toll on my body.

The everlasting persistence that I tried to give throughout the competition and my decision to say “no” to every other opportunity paid off really well in the end. I was very grateful for the 3rd place.

In this competition, our team managed to achieve the highest score for full presentation that consisted of full proposal and 10 minutes presentation. We also recorded the highest score for prototype but suffered a huge point reduction in case study when we accidentally mentioned our university in the presentation (too bad!) Although we could take the first place if not for ‘that’ slip, it was more than enough to show that my decision to focus on one thing was right. 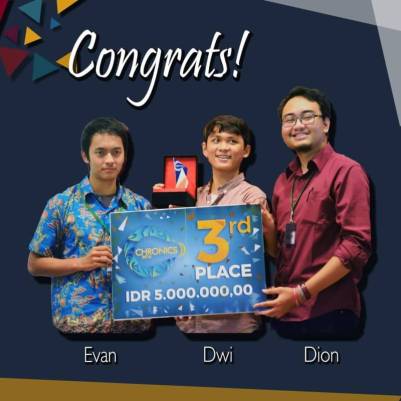 Credit goes to HMTI UGM’s official account for this one

Taking a break during the holiday also helped a lot to regain my commitment towards the organization I took part in the university. This time, I was able to generate creative ideas in which I believed that it would create a notable difference if could be applied consistently. My attendance rate and punctuality in almost every weekly meeting were considered to improve significantly. Fortunately, I was happy that all those efforts didn’t go unnoticed. The awarding session in Industrial Night three nights ago had me as the most outstanding staff of Departemen KWU in Himpunan Mahasiswa Teknik Industri UGM in 2016 (seriously, guys?).

Despite many people considered it as a small win, I found it to be more meaningful, even more than CHRONICS, due to the scoring criteria in which it was accumulated from the peer review of every member within the department whom I have worked together with for the past 10 months. Whatever the reason was, please know that I am eternally grateful and honoured to receive this acknowledgement and I wish KWU a bright future ahead. Thank you!

I want to dedicate this post to say how I am thankful for all the blessing, victories, and setbacks in the past 11 months. It helped to shape me into who I am today and there is no way I managed to prevail against the obstacles without the assistance of those around me.

Massive gratitude from me to everybody who have helped me to grow along the way, especially my parents for their endless and continuous support in the ups and downs. I might not be that type of person who loves to share stories with them. But I fully realize that everything will be unlikely without their assistance!

Lastly, I am proud to say that 2016 is now officially the greatest year of my life. However, I expect 2017 to be even greater as I envision the next 2 years as the maturity phase of my self development process. Hopefully, my turn for graduation will come in less than 2 years. And as scary as it sounds, I believe that in every dark clouds, there is always silver lining that follows. (cielah)